‘Tis the time of year for traditions, and our little family of four has several. Some new, some passed down from our childhoods. Hubby brought one back this year and I hope it continues for a long time. His father wrote a letter to each of his children every year and hid it in the tree. The letter highlighted accomplishments from the year and were a way of not only chronicling major life events but to keep him connected to his kids as they got older. As new members entered the family (spouses and grandchildren), each one would receive their own letter, and he kept the tradition going until he died. I teared up this morning watching my boys read their letters and thinking about my late father-in-law. 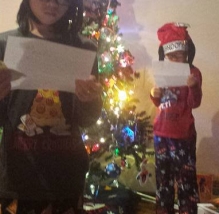 Another tradition we adapted from hubby’s childhood is the yearly ornament. He received one every year in early December, and when he moved out his mom gave him the ornaments for his own tree. Some of them didn’t survive the decades of storage (and for a long time lived in a sad box of broken memories), but many are on our tree today. The boys now get their own ornament each year, often symbolizing a milestone or obsession from the year. I love opening the box and reflecting on years past.

We were together a while before we had children, and the tradition originally involved a simple exchange. One of my favorite ornaments on the tree is from our early years of exchanging, and one that the children never really understand when we pull it out. 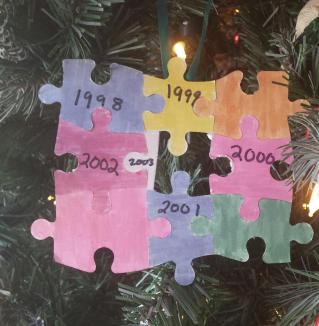 Hubby and I started dating in 1998 (well, technically 1993, but that’s a whole other story). He joined the Navy in 1999. We were married in 2000, and in 2003 he left in January for what was supposed to be a three week deployment. He didn’t come home until late September.

2003 was a rough year, and that Christmas he made an ornament to represent the missing puzzle piece of our relationship. Whenever I see it, I can’t help but get emotional. That separation was difficult, but it strengthened us in the long run. And every Christmas when I see this ornament, I think about all the other military families who endure separation, especially those who are experiencing it during the holidays. It isn’t easy to be away from your family, and it isn’t easy to be the ones left behind. Every day, but today especially, I am thankful to have hubby home with us, and thankful for those who continue to make sacrifices for our freedom.

Whatever you celebrate, enjoy the time together with people you love. But don’t forget about those who may be lonely and struggling with separation. I could not have survived those nine months without the support of friends and neighbors.

And cheers to traditions, new and old!

One thought on “Traditions”