Camp NaNoWriMo starts Monday which, incidentally, is also the day I become a parent of a teenager.

I can’t decide if I should be stocking up on coffee or vodka.

This April marks my fourth time doing Camp NaNoWriMo, which is a relaxed version of the National Novel Writing Month that takes place every November. You set your own writing goals, and I learned the hard way that they better be realistic or I’m a barrel of disappointment by the time I reach the end of the month.

Writing camp takes preparation, much like regular camping. The first time I tried it, I was woefully unprepared. It was a disaster, much like the first time hubs and I went camping and realized we were missing about half the things one needs to survive a weekend in the woods.

My life is a bit crazy. But recently I decided that if I am going to be a successful writer, I need to look at it more like a second job rather than a hobby. Something I commit to. Solid, productive writing. Not opening a word document, staring at it for a while, then wandering the Internet. The problem? I’ve been frustrated with my current project and afraid to wander back into the novel I shelved last year after a round of query rejections. I needed to get out of my head and let the words flow. But how?

While writing SECOND IN COMMAND, I had tight deadlines, which was extremely motivating. So the first thing I did was look at my calendar and give myself an end date. The annual PennWriters conference is mid-May, and I signed up for pitch appointments. Which means I need to have a project to pitch. A finished project.

Step One: Set a deadline for writing project. Commit to focusing on that project ONLY.

I printed out a March-April calendar, looked at it alongside our life calendar, and circled days I would be able to write. I think one of the obstacles facing writers who also work, raise children, take care of households, etc, is that we feel guilty carving out time for writing. But writing is important. Even if it pays very little or not at all, it is something I need to have in my life. I’m happier when I’m writing. It’s therapy. So far I have followed through and written on my circled days, and on the non circled days I spend extra time with my family or just relax. Giving myself permission to take time off in between has helped me focus on my writing days.

Step Two: Create mini-deadlines. Make them reasonable. If they aren’t working, revisit the schedule. Celebrate success. Crossing off days is weirdly rewarding. (Stickers work well too.) I calculated how much work I need to do to finish the project in time for PennWriters, and wrote mini-deadlines on the circled days.

The time part figured out, I moved to the other part of my blockage. Where the hell do I even start with this thing? The novel originally had two separate story lines, and the feedback I got was that they weren’t gelling and a few agents didn’t like the one character’s voice. So I cut her. And was left with half a book. Now what? I needed to get back to the drawing board. I read books on outlining and plotting, and thought ugh, I’m normally a panster, but I don’t have time to spend in multiple revisions. I need to fill the plot holes early.

Step Three: Make a plan. Get the hard stuff out of the way.

I brainstormed on my trusty legal pad, then filled out note cards for each chapter. They’re three different colors to indicate where they fit within the three act structure. I figured out which chapters from the original version would work moving forward and where I’d need to add additional content. 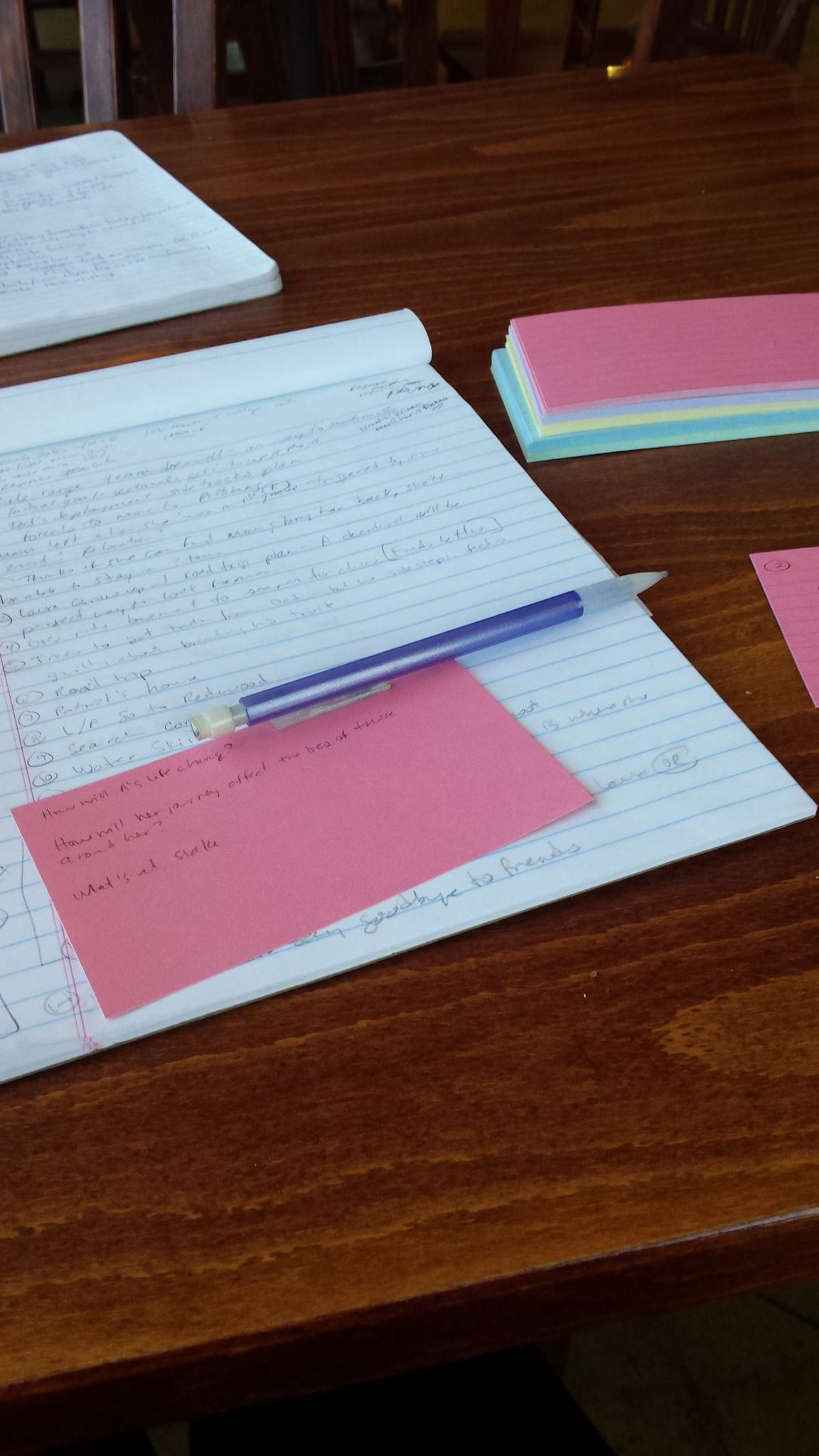 I’ve been writing for two weeks now, and the note cards have been an amazing tool. I know where the scene starts and what I need to include and can focus fleshing out characters and creating tension. The fun stuff. I told hubs last night that this is the first time I’ve been able to write freely in a long time. It feels good. Of course there was a large hurdle to overcome — my first scene is brand new, and right now, it’s not great. But I got to the point where I had to tell myself to let it go and move on. To paraphrase Dory: Just Keep Writing.

Step Four: Find ways to keep the flow moving. Meditate. Close your eyes and focus on your breath. Go for a walk. Focus on how your senses perceive the world around you.

Step Five: Love yourself. The last thing I did to get ready is a tip I learned from @qnwrites on Instagram. She posted about writing a letter to her future self that she’d open during Camp. I loved this idea and expanded it a little by writing letters to my future self to be opened at the end of each week of Camp and when I finished each section of the book.

They’re color coded to match my index cards. Of course.

I taped them up on my bulletin board to keep myself on track and motivated.

April is packed. The boys’ activities fill our calendar, my parents return from Florida mid-month, and our biggest recruitment event at work happens on April 30. In addition to Camp NaNoWriMo, I’m also this month’s hashtag leader for the Writing Challenge  on Twitter. And we’re taking a mini vacation to visit family. Whenever I open my online calendar, panic ensues.

Step Six: Commit to sit. It’s the only way. Fill the coffee mug, crank the tunes, and write.

2 thoughts on “How to pack for Camp”