They say writers fall into one of two categories: Plotters and Pantsers. But the more I write, the more I realize it isn’t truly one or the other. Sure there are hardcore outliners out there, especially in the mystery/thriller genres where the author needs to know what will happen in the end. But I find that writers are often a blend of both, and I am trying to find the right balance.

In the beginning of the journey I like to call, “Hey, I can write a book”, I had an idea and I sat down to write. By the seat of my pants, as the saying goes. I quickly realized that if the book were going to make any sense past my romantic mind wanderings, I’d need to get some structure in place. The first craft book I read (a Christmas gift from my sister) was Martha Alderson’s The Plot Whisperer. As I read it, I used her techniques and advice to roughly plot out my book. It was still pantsing, but Pantsing with Purpose. Even though I didn’t know what the characters were doing scene to scene, I knew where I wanted to be at each key beat of the story, and that helped keep me on track.

When I wrote my second novel, I tried to stick to a similiar course, but it was a bit more challenging because there are dual storylines in two different time periods. I needed two separate story arcs that came together in the end, and so I wrote each story separately with the intention of eventually merging them together. To make matters worse, I had gotten so burned out by frustration over the beginning of the first novel (the original version had a prologue, and the feedback I received for said prologue was not exactly positive) that I started the story partway through. At one point the various documents on my laptop became confusing. I decided to create a wall of color coded sticky notes (which after much moving around became a floor of sticky notes) to keep everything organized. You can see the before and after below, accompanied by my lovely cat, Mia. I also went through several sheets on the legal pad trying to figure out the best way to merge the stories. 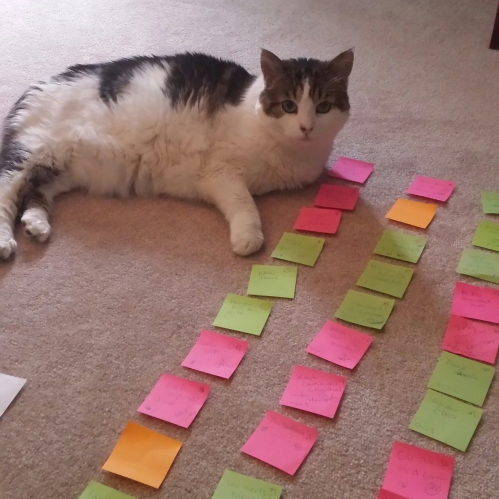 Some of the above decisions were poor ones. I should have kept the stories together from the start and I should have thoroughly outlined before starting to write. I spent way too much time in revisions, staring at the sticky notes and legal pad, rearranging the chapters until they made sense.

When I wrote my verse novel, I was required to turn in an outline first. My editor created a beat sheet of sorts and we had to identify the key moments of the story before it could be approved. I’ll admit, outlining was tough. I don’t always know what the characters will do and feel constrained by the thought of first this, then this, then this. And I did wander a bit away from the outline when I wrote the book, but let me tell you how much easier it was knowing where I was headed. (It was! Much, much easier!)

So now my friends, I am embarking on my next creative venture, and as per normal have decided I want to mess with the narrative status quo a bit. Which means I should outline, right? Which means I learned my lesson and I am not about to type willy-nilly for the next 70k and then spend months and months in revision hell, right?

I have tried. I’ve drawn plot diagrams and written out the beats with blanks underneath. I know it will help my story in the long run. But something in my brain keeps me from committing to structure.

Camp NaNoWriMo starts Sunday. It’s my second time participating, and things didn’t go so well last time. I’ve set a modest goal of 10k (camp is more flexible than the traditional NaNoWriMo in November). Right now my WIP is just shy of 6k. I’ve been working on it for two months. You do the math. If I want to be successful at camp, I need some sort of outline.

5 thoughts on “For the love of outlines”